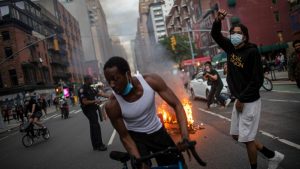 Hundreds of people have been arrested the last 24 hours in NYC after peaceful protests spiraled into chaos.

Demonstrators clashed with officers and torched NYPD vehicles as they called for an end to police brutality after the death of George Floyd.

The NYPD says at least 345 people were arrested during Saturday night protests, with 47 NYPD vehicles damaged and 33 officers injured.

Protests took place across the city Saturday and today.

After a woman allegedly throwing a Molotov cocktail into a police squad car in Brooklyn, she was charged  with attempted murder.

In Manhattan’s peaceful Union Square, protesters turned violent after a video circulated online showing an NYPD SUV ramming into a group of protesters in Brooklyn.

Mayor Bill de Blasio  at a briefing today said that :

“NYPD showed tremendous restraint overall,” but he was concerned about video showing two police cruisers lurching into a crowd of demonstrators on a Brooklyn street.

And NYC Mayor added that:

Protesters on the move. Not staying in one place long. Using social media to find each other. Right now it is a roving rally, but most say they plan to end up in Brooklyn tonight @CBSNewYork pic.twitter.com/mFzjqrkiT4

Mayor De Blasio appointed two city officials to conduct an independent review of how the protests unfolded and how they were handled by the police.

Riots in California – L.A on a State of Emergency – Curfew in San Francisco… (VIDEOS)